The First Book of Dooms 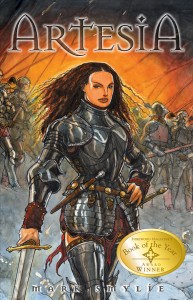 The Highlands of Daradja are dotted with ancient citadels and castles, held by petty kings and clans who war against each other and the brigand bands that plague the bleak and mountainous region.  Artesia, once a concubine to King Branimir of the Citadel of Dara Dess, has in time risen to become one of his chief war captains; a priestess to dread goddesses; and a magician like her mother once was, controlling warlike spirits.  She and her captains carry the cause of their king against his enemies in the field, but afraid of her growing power, her King betrays her.  And in the middle of betrayal and tragedy comes word that the neighboring Middle Kingdoms have been invaded by an ancient enemy to them all, the Empire of Thessid-Gola…

Originally published as a comic book miniseries by Sirius, then collected by both Sirius and Archaia.

Selected as Best Comics Entry at the 2004 DIY Book Festival.

Selected as a Comic Worth Reading by Joanna Draper Carlson

“The thinking man’s fantasy epic for the 21st century begins here… The world of Daradja [is] as infinitely detailed as any ever created in the annals of fantasy.  Smylie cites Tolkien and Robert E. Howard as his influences…and he seems to have captured the essence they began their epic stories with and spun it into something uniquely his own.  Never before has a tale of such immense magnitude and depth debuted in comic form...”

“War, love, lust, hate – Artesia has it all…in a fantasy world that combines the best storytelling methods of Homer, Chaucer, Shakespeare, Howard, and Tolkien, adds a healthy dose of classical mythological syncretism, a deep and rich history, and engaging characters – all melded to an incredible, breathtaking art.  Four Stars”

“How can it be that one individual can do as much as Mark Smylie does on Artesia?  A man who wears many hats, Smylie is this book’s writer, penciller, inker, painter, letterer, and publisher, yet even that doesn’t begin to describe the amount of work he does in bringing this medieval fantasy tale of a warrior priestess to life.  He is also costume designer, weapons maker, lyricist and poet, cultural historian, military strategist, theologian, architect and [cartographer], all in the service of fleshing out this fictional world… If this added up to a straightforward, yet still entertaining, tale, that would be plenty, but that’s still not all.  The way he approaches themes such as religion, sexuality, and the use and abuse of power, elevates this into a true work of art, in the same tradition as Cerebus, Elfquest, A Distant Soil and Finder.  In a better world, a book like this would be an international bestseller…”

“Artesia is a vivid and compelling character: strong, bold, hard, and passionate… Smylie’s impressive art, with its lush painted colors, has a European feel, underscored by his very European matter-of-fact portrayal of bloody violence, sexual situations, and full frontal nudity.  Fans of epic fantasy will be interested in the series; recommended for larger adult collections.”

“Smylie’s art is as colorful and striking as his protagonist…  His style contributes a sense of realism that elevates Artesia above other fantasy material and gives it a mythic quality…  It’s a book that haunts when you’re done.”

“Writer and illustrator Mark Smylie has created a world so deep with history and so rich with detail that it almost reads like an illustrated history book [featuring] war, politics, sex, betrayal, superstition, spirituality, religion, and magic.  He’s created…a world that could border on the fringes of reality.”

“Mark Smylie is something of a best-kept secret in the comics industry.  That needs to change.  Artesia is an impressive mature first work from a clearly talented author and artist…[and] his unflinching and complex storytelling of intrigue, sex, strategy, and death carry the day.  And his lush combination of line art and painted color brings beauty and fierce life to it all.”

“Smylie really has created a whole entire world filled with details very rarely seen in this medium… It takes the best parts of of great civilizations throughout history to make the complexity needed for such a grand scale world. The art is simply stunning throughout each novel in an exquisite painted form…this may be one of the best series I have ever read.”

“If Robert E. Howard wrote comics, this would be it.  Battles and their aftermaths are beautifully written (and portrayed)… Artesia is one of the best fantasy comics I’ve read.  Awe-inspiring artwork, good storytelling, and a superbly detailed world combine to create an original and interesting epic story.”