The Third Book of Dooms 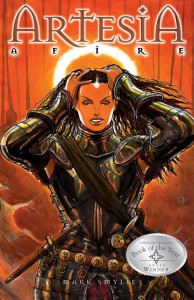 Artesia, self-proclaimed Queen of the Daradjan Citadel of Dara Dess, has led an army out of the Highlands to aid their neighbors in the Middle Kingdoms against an ancient enemy, the Empire of Thessid-Gola.  Their intervention has foiled an Imperial trap for the army of the Grand Duke, Owen Lis Red, and now they march to join forces with Awain, the High King of the Middle Kingdoms.  But the Middle Kingdoms do not take kindly to usurpers, and the further the Highlanders march into the besieged lowlands, the more enmeshed in their politics and intrigues Artesia becomes.

Magic coursing through her veins, the whispers of ghost in her ears, an army bristling at her back; Artesia is a Queen at war, facing the limits and temptations of power…

Artesia Afire was the first series published exclusively by Archaia.

“Comics have no other on-going story quite like Artesia, nor does it have many other female characters as dynamic and intelligently written as her.  This series is a treasure… The drama in Artesia does not come from epic battles – although Mark Smylie’s insanely good at drawing those – it comes from his intense understanding of what happens when people come together in the name of politics and religion, of his understanding of the evil and the good that mankind is capable of.”

“Artesia can, for lack of a better description, be labeled sword and sorcery. But…the fantasy flavor of Artesia is borrowed more from Greek mythology, and the setting evokes the political and religious structure of Europe during the middle ages, as surging waves of knights clash on muddy battlefields. Although comparisons have been drawn to works like The Lord of the Rings, I’d argue the inspirations are more archaic than that. There’s more of, say, Homer than Tolkien at influence… The bottom line with the Artesia series is that it’s strikingly illustrated, and convincingly written; it’s impressive in its detail, evocative in its milieu, rarely less than interesting, and occasionally shamelessly pornographic…”

“This work is the most successful mature work I have read. Grade: A+… [and] Land of Frost Best Artist 2003: His work on Artesia demonstrates that broad sweeping epics are able to be perfectly done in the comics medium.”

“…A strong story that is bound to enthrall anyone who reads it.  Smylie’s paintings shift at a moment’s notice from lush to terrifying, much like the world of Artesia itself…  Smylie had done what I think few can really manage to do properly – create an entire new world in their head and successfully bring that to the page.”

“Artesia is one of the great characters in comics.  A pagan warrior-priestess fighting her way to glory and honor in a richly-detailed world of gods, ghosts and ancient civilizations.  Mark Smylie writes and paints her chronicle with a conviction and joy that are infectious.  Whether you’re a fan of fantasy, political intrigue, historical spectacle or just great storytelling, Artesia will set you afire.  I can’t wait for more.”